Australia can stop greenhouse gas emissions by 2050: here’s how

To avoid dangerous climate change there is a finite amount of greenhouse gas emissions, in particular CO2, that we can add to the atmosphere – our global carbon budget. If we use our budget wisely, we have until about 2050 to transition to zero net emissions. But how do we get there?

Internationally the world has agreed to limit warming to 2C. To keep under this limit, globally we can emit around 1,700 billion tonnes of greenhouse gases (measured in CO2-equivalent) between 2000 and 2050. This would give us a 67% chance of limiting warming to 2C or less.

Just over a third of this budget was already used up between 2000 and 2012, leaving approximately 1,100 billion tonnes – this is the remaining global carbon budget.

Global emissions are currently projected to rise without further actions, putting us on a pathway to exceed this carbon budget and experience temperature rises of 4C or more.

The Climate Change Authority has calculated Australia’s equitable share of the global carbon budget as 10.1 billion tonnes of carbon dioxide equivalent for the period 2013 to 2050. If we continue to emit at our current rate, we will exceed our carbon budget by 2028 – that’s just 13 years from now.

If we are to live within our carbon budget, we must begin to reduce emissions now. This will allow us to use our remaining budget over a longer period of time and enable a smoother transition to a low carbon Australia. If we delay, the transition will need to be faster, meaning more cost and more disruption.

The following infographic produced by ClimateWorks shows the latest science behind the carbon budget. 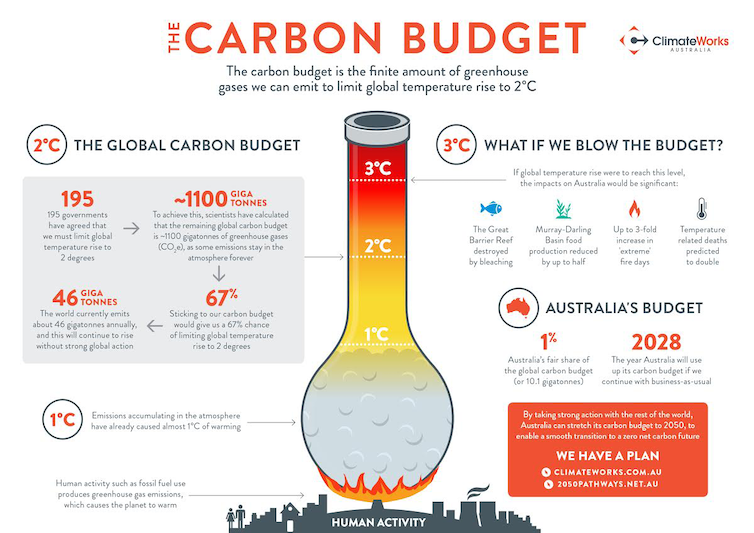 The good news is Australia can balance its carbon budget. Research by ClimateWorks and Australian National University has found that Australia can achieve zero net emissions by 2050 and live within its recommended carbon budget, using technologies that exist today, while still growing the economy.

This pathway relies on four “pillars” of action:

Choose your own pathway

This research is explained in our interactive 2050 Pathways website.

Australia is fortunate to have an abundance of energy and natural resources, providing us with a diversity of choice in reducing our emissions. This means that there are many ways Australia could balance its carbon budget.

The online 2050 Pathways Calculator allows users to create their own pathways to net zero emissions by 2050, staying within our carbon budget.

The levels of activity in each area of abatement can be changed from level one (business-as-usual) to level four (maximum reasonably feasible). Users can change the extent to which each emissions reduction opportunity is pursued and see the impact on demand for energy, on energy supply and on greenhouse gas emissions. 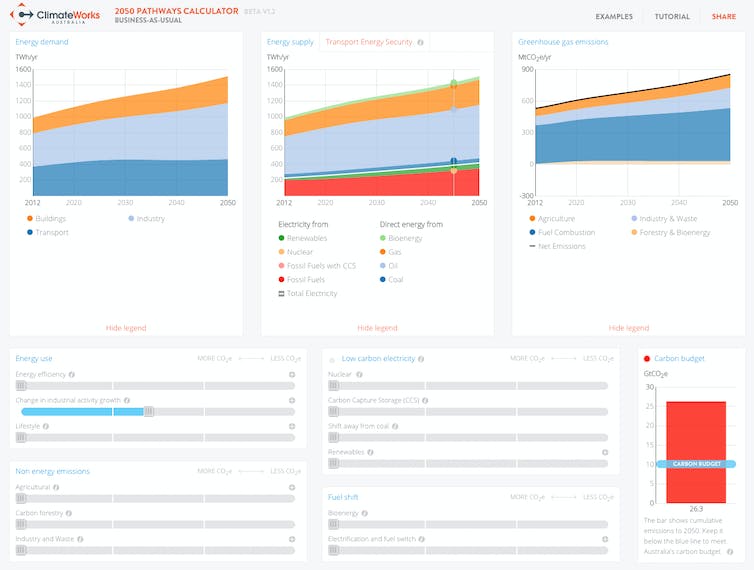 On business-as-usual, we’d blow the carbon budget by 2028. ClimateWorks

As would be expected, increasing the level of effort in some of the opportunities decreases the effort required from other areas of action to stay within the carbon budget.

For example, maximum effort in energy efficiency could enable less reliance on emerging technologies such as geothermal, wave and tidal energy production, or a slower shift away from coal.

Or, if technologies such as batteries or biofuels improved faster than expected, less effort would be required in other areas. 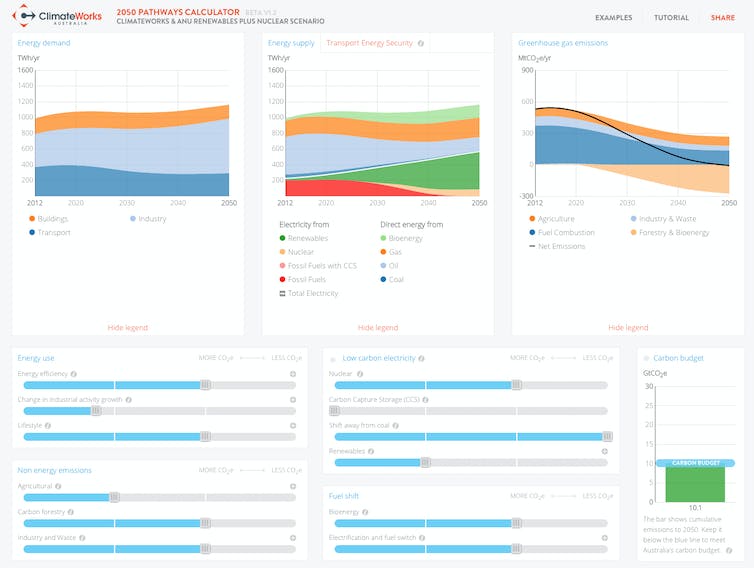 The calculator can help users to understand the limitations, trade-offs and inter-dependencies involved in meeting our carbon budget.

In Paris later this year, more than 190 countries including Australia will meet to confirm their commitment to reducing emissions at the United Nations Climate Change Conference.

Many global businesses are taking the lead through co-ordinated business groupings such as RE100 and We Mean Business.

Australia’s contribution to balance its share will be reviewed internationally by our allies and trading partners.

An article recently published by the Lowy Institute argued that failure to engage constructively with international climate change negotiations could affect our ability to achieve our national interests in our relations with other countries.

The consequences of not addressing climate change will also be felt at home. Exceeding 2C warming will have serious consequences for our health, agriculture, water supply, natural landscape and lead to an increase in extreme weather events such as droughts, floods and bushfires.

Like our national budget, failing to balance our carbon budget will be felt well beyond the current fiscal cycle and would place an unreasonable burden on future generations. The good news is that this is a budget we know we can balance, if we get started now.