Activity: Blue: Who is Helping Our Oceans? – Science – Year 7 Quick summary: This lesson incorporates clips from Blue The Film as learning inspiration. Students investigate two Australian scientists who are working to protect marine species, and investigate what skills and knowledge might be needed by these scientists to perform their roles. Student will then investigate an Australian scientist of their choosing and create a poster or infographic to describe what this person does, what some of their tasks are, and some of their achievements. Finally, students are asked to imagine what they would do if they were a scientist helping our environment. 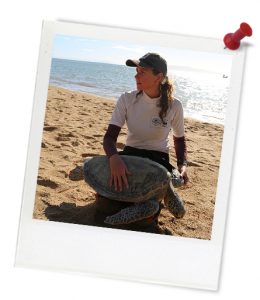 Learning intentions: Students will understand how scientists work to help our ocean.

By international standards, Australia is a marine conservation leader. It has the world’s largest coral reef, the best managed fisheries and potentially, the greate

Thought starter: Would you like to be a scientist?

Who is helping our oceans?

Once you have watched the videos describing the roles of Jennifer and Christine, your teacher will break the class into groups and assign each group as either Jennifer or Christine. In your groups, complete the answers in the table relevant to your group.