Animal response to a bushfire is astounding. These are the tricks they use to survive

Have you ever wondered how our native wildlife manage to stay alive when an inferno is ripping through their homes, and afterwards when there is little to eat and nowhere to hide? The answer is adaptation and old-fashioned ingenuity.

Australia’s bushfire season is far from over, and the cost to wildlife has been epic. A sobering estimate has put the number of animals killed across eastern Australia at 480 million – and that’s a conservative figure.

But let’s look at some uplifting facts: how animals survive, and what challenges they overcome in the days and weeks after a fire. 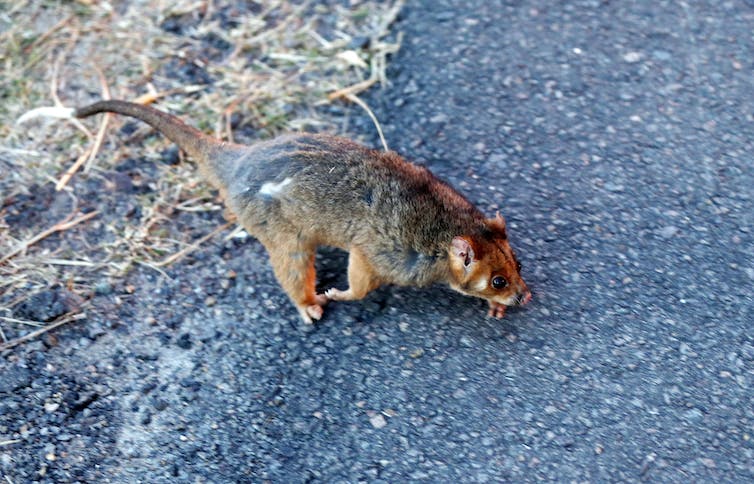 This possum decided to flee a bushfire in the NSW Hunter region in 2018, but many other animals stay put. AAP/Darren Pateman

In 2018, a staff member at Audubon Zoo in the United States accidentally burned pastry, and noticed something peculiar. In nearby enclosures ten sleepy lizards, or Tiliqua rugosa, began pacing and rapidly flicking their tongues. But sleepy lizards in rooms unaffected by smoke remained burrowed and calm.

It was obvious the lizards sensed the smoke from the burnt pastry, probably through olfaction, or sense of smell (which is enhanced by tongue flicking). So the lizards were responding as they would to a bushfire.

Read more: Bushfires have reshaped life on Earth before. They could do it again

Animals also recognise the distinct sounds of fire. Reed frogs flee towards cover and eastern-red bats wake from torpor when played the crackling sounds of fire.

Other species detect fire for different reasons. Fire beetles from the genus Melanophila depend on fire for reproduction, as their larvae develop in the wood of burned trees. They can detect fire chemicals at very low concentrations, as well as infrared radiation from fires.

The beetles can detect very distant fires; one study suggests individuals of some species identify a fire from 130km away.

Once an animal becomes aware of an approaching fire, it’s decision time: stay or go?

It’s common to see large animals fleeing a fire, such as the kangaroos filmed hopping from a fire front in Monaro in New South Wales a few days ago. Kangaroos and wallabies make haste to dams and creek lines, sometimes even doubling back through a fire front to find safety in areas already burned.

Other animals prefer to stay put, seeking refuge in burrows or under rocks. Smaller animals will happily crash a wombat burrow if it means surviving a fire. Burrows buffer animals from the heat of fires, depending on their depth and nearby fuel loads.

From here, animals can repopulate the charred landscape as it recovers. For example, evidence suggests populations of the agile antechinus (a small carnivorous marsupial) and the bush rat recovered primarily from within the footprint of Victoria’s Black Saturday fires.

Avoiding fire is only half the battle

The hours, days, and weeks after fire bring a new set of challenges. Food resources will often be scarce, and in the barren landscape some animals, such as lizards and smaller mammals, are more visible to hungry predators.

Birds of prey arrive quickly at fires. Several species in northern Australia have been observed intentionally spreading fires by transporting burning sticks in their talons or beaks.

One US study published in 2017 recorded a seven-fold increase in raptor activity during fire. They begin hunting as the fires burn, and hang around for weeks or months to capitalise on vulnerable prey. 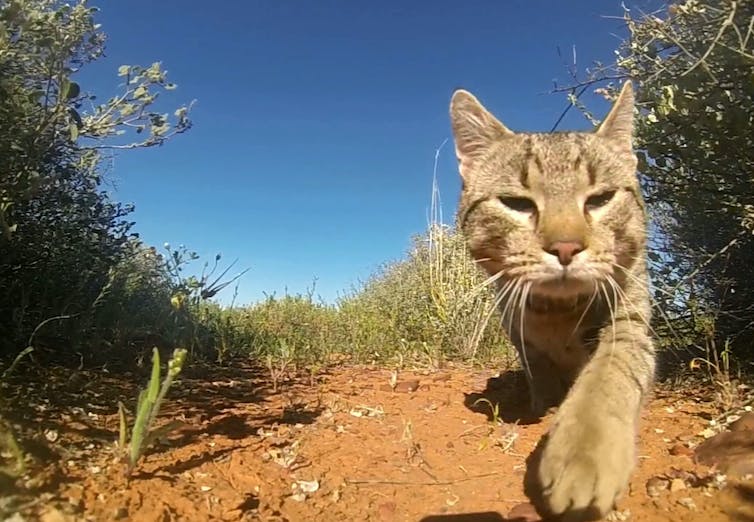 Feral cats can travel kilometres in search of vulnerable prey in a burnt-out landscape. HUGH MCGREGOR

In Australia, introduced predators can also be drawn to fires. Feral cats have been observed travelling up to 12.5km from their home ranges towards recently burned savanna ecosystems, potentially drawn by distant smoke plumes promising new prey.

A 2016 study found a native rodent was 21 times more likely to die in areas exposed to intense fire compared to unburned areas, mostly due to predation by feral cats. Red foxes have an affinity for burned areas too.

So should a little critter hunker down, or begin the hazardous search for a new home?

Perhaps because of the risks of moving through an exposed landscape, several Australian mammals have learnt to minimise movement following fire. This might allow some mammal populations to recover from within a fire footprint.

Native mammals have been found hiding in beds of ash after fires.

Read more: Koalas are the face of Australian tourism. What now after the fires?

Short-beaked echidnas seek refuge and, when finding it, lower their body temperature and limit activity, so reducing the amount of food they need for energy. Despite their spiny defences, echidnas have been found more often in the stomachs of foxes following fire, so staying put in a little refuge is a good move.

Small marsupials such as brown and yellow-footed antechinus also use torpor to suppress their energy use and therefore the need to seek food. 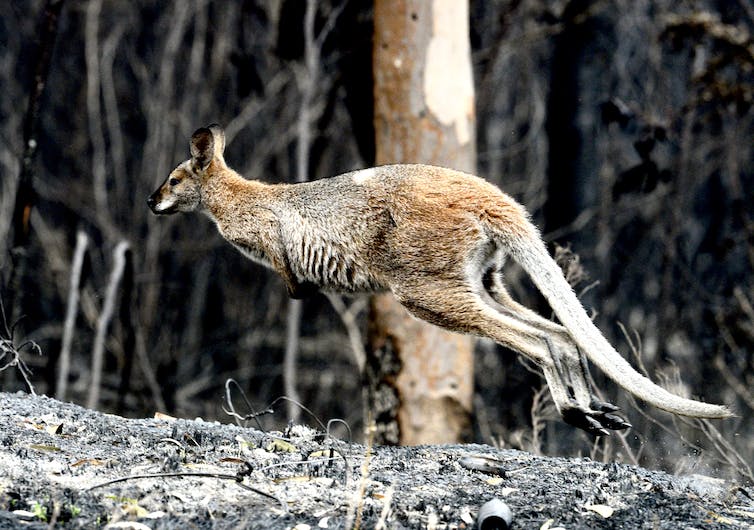 Some animals can flee a fireground, while others use bush-smarts to stay put. Jeremy Piper/AAP

Not all wildlife have adapted to stay put after a fire, and moving in search of a safe haven might be the best option.

Animals might take short, information-gathering missions from their refuges into the fireground before embarking on a risky trek. They may, for example, spot a large, unburned tree that would make good habitat, and so move towards it. Without such cues to orient their movement, animals spend more time travelling, wasting precious energy reserves and increasing the risk of becoming predator food. 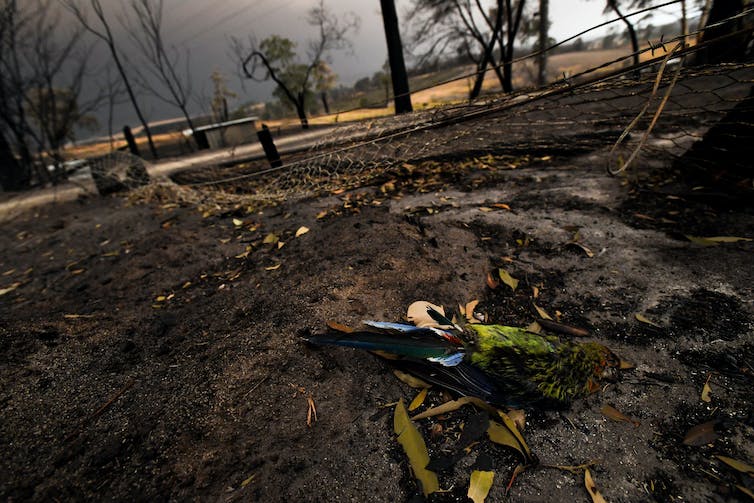 A dead bird at a Victorian property on January 4, 2019. The ecological toll of the bushfires is immense. James Ross/AAP

Survival is not assured

Australia’s animals have a long, impressive history of co-existing with fire. However, a recent study I led with 27 colleagues considered how relatively recent threats make things much harder for animals in fire-prone landscapes.

Some native species are not accustomed to dealing with red foxes and feral cats, and so might overlook cues that indicate their presence, and make the bad decision to move through a burned landscape when they should stay put.

When fires burn habitat in agricultural or urban landscapes, animals might encounter not just predators but vehicles, livestock and harmful chemicals.

And as this bushfire season has made brutally clear, climate change is increasing the scale and intensity of bushfires. This reduces the number of small refuges such as fallen logs, increases the distance animals must cover to find new habitat and leaves fewer cues to direct them to safer places.

We still have a lot to learn about how Australia’s wildlife detect and respond to fire. Filling in the knowledge gaps might lead to new ways of helping wildlife adapt to our rapidly changing world.