Curious Kids: how do scientists know evolution is real? 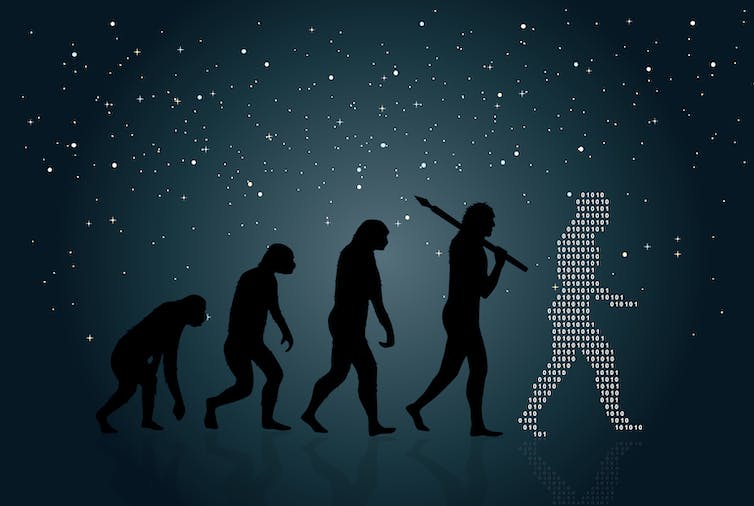 Darwin wondered: what if species change over time in response to their environment? Shutterstock

In science, we look at the evidence and try to find the theory that best explains it. And that’s what happened when it came to figuring out evolution.

We can see life evolving all around us. Plants, animals and even bacteria are adapting to different conditions (like climate change), to new predators and diseases.

A young man named Charles Darwin was one of the first to realise how this happens. He lived in England nearly 190 years ago and decided to sail around the world (because he didn’t really know what to do with his life).

For two years people on the boat mapped the shore and explored South America and Australia. Darwin’s job was to check out the plants and animals they found. Sound fun? Not if you were seasick like poor Darwin.

He began to wonder why animals were so different to those back in England. He had the revolutionary idea that they weren’t always that way. Maybe these species had changed over time in response to their environment, he thought.

He noticed that little brown birds that they called finches, living on a group of islands called the Galápagos, looked similar to each other but had different-shaped beaks on different islands.

Darwin realised that the beaks were good for getting different kinds of food: big heavy beaks for crushing tough nuts that grew on one island; little beaks for eating fruit; sharp beaks for probing cactus; and long beaks for catching insects on other islands. 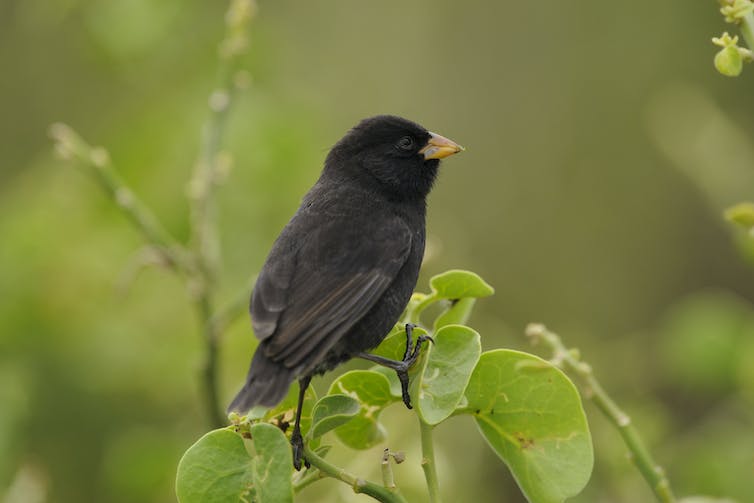 Darwin looked closely at the beaks of finches on the Galápagos Islands. Shutterstock

He suggested the beaks of individual ancestor birds were all a bit different, and the differences were passed down from parents to chicks. Birds with slightly heavier beaks did better on the island with nuts, and they laid more eggs and had more chicks than other birds. These chicks also had heavier beaks, and did better than other birds, and laid more eggs. He called this “natural selection”.

Darwin suggested animals or plants that survived in different environments would eventually become so different they couldn’t get together to have chicks. This is how one species splits into two.

The evidence piles up

During Darwin’s day, these ideas seemed shocking. Most people believed species of plants and animals had always been the way they were; that they were created that way. But soon, people began to find new evidence that fit Darwin’s theory, or reconsider old evidence in light of what he proposed.

People found dinosaur bones and realised these enormous creatures once roamed the Earth but were now extinct. Now we know, from comparing skeletons, they are related to birds, and we even have fossils of feathered dinosaurs.

One famous example of fossils that showed earlier “versions” of contemporary animals is the “walking whale” – fossils that indicated that earlier versions of whales had legs. People couldn’t believe that natural selection could turn a hippo-like land animal into a whale, that lost its legs as it became a better swimmer. But recently whale fossils with legs were discovered. (Even today, we can see that whale embryos develop four masses of cells called limb buds, but which don’t grow into legs.) 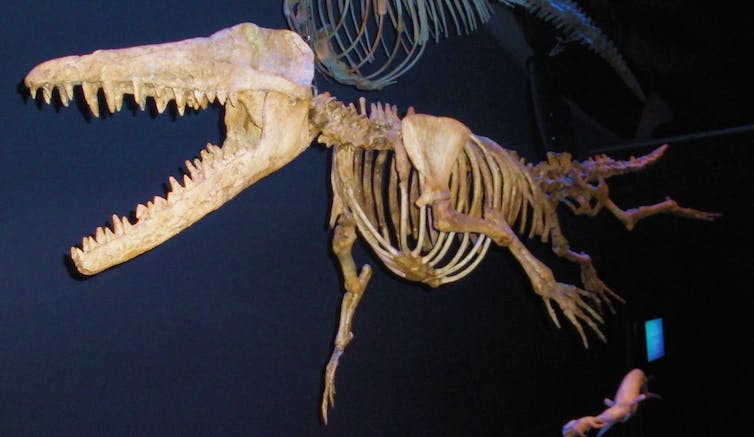 The skeleton of Ambulocetus natans, an extinct ‘walking whale’. By Ghedoghedo – Own work, CC BY-SA 3.0, CC BY

In Darwin’s day nobody knew the Earth’s crust changes dramatically; land under the ocean can buckle upward to form mountains. That’s why cockle shells can be found at the top of huge mountains. All this evidence supports the idea that environments change and animals adapt.

Splitting one species into two takes millions of years, but we can sometimes catch this happening. Little groups of wallabies that live in rocky outcrops in Queensland are a famous example because they show a lot of intermediates (meaning populations that are starting to get so different from each other that they don’t interbreed well and are close to becoming two new species).

A huge new source of evidence for evolution came with the discovery of DNA, which is shared by all life on Earth. DNA changes slowly as mutations accumulate. DNA is similar for species that are closely related (like Darwin’s finches, or like hippos and whales) and more different between species that are distant (like humans and whales, or humans and plants). This is a pretty big clue supporting Darwin’s idea that living things are related and have changed over time.

Scientists have looked at the huge piles of evidence and concluded that evolution is the best explanation we’ve heard so far on how life on Earth came to be as it is today.