The Sun produces a lot of energy called solar energy. Australia gets 20,000 times more energy from the Sun each day than we do from oil, gas and coal. This solar energy will continue for as long as the Sun lives, which is another 5 billion years.

Solar panels are made of solar cells, which is the part that turns the solar energy in sunlight into electricity.

Solar cells make electricity directly from sunlight. It is the most trusted energy technology ever made, which is why it is used on satellites in space and in remote places on Earth where it is hard to fix problems.

How do solar cells work?

Solar cells are made using silicon atoms. An atom is basically a building block – just like a Lego brick but so tiny you’d need a special machine to see them.

Because the silicon atoms are so small you need trillions and trillions of them for a solar cell.

To make the solar cell you need a wafer layer of silicon, about the same size as a dinner plate but much much thinner – only about three times the thickness of a strand of your hair.

This silicon layer is changed in a special way using hot temperatures of up to 1,000℃. Then, a sheet of metal is put onto the back of the layer and a metal mesh with holes in it, like a net, is put on the front. It is this mesh side of the layer that will face the Sun.

When 60 solar cells are made they are fixed together behind a layer of glass to make a solar panel. 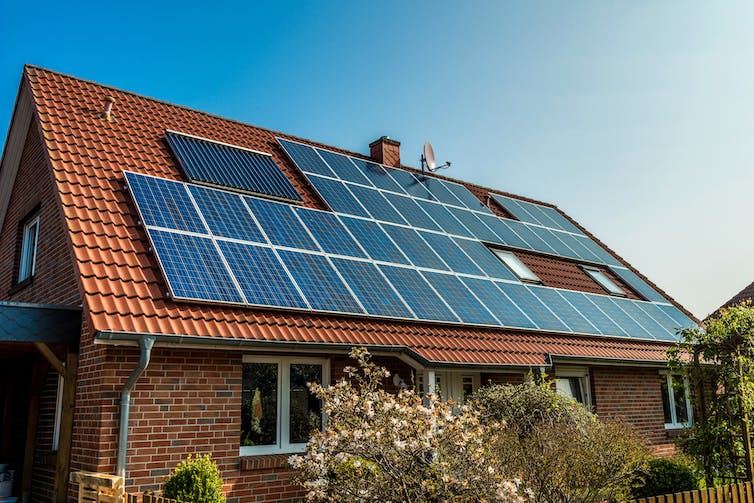 On this roof you can see one solar hot water collector (top left) and 42 solar electricity panels, each of which is made of 60 solar cells combined behind a protective glass. Shutterstock

If your house has a solar power system, it will probably have 10 to 50 solar panels attached to your roof. Millions of solar panels are used to make a large solar farm out in the countryside. 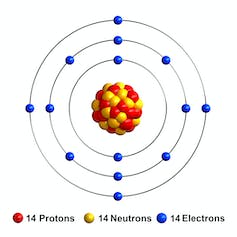 Each tiny silicon atom has a nucleus at the centre made up of 14 teeny-tiny protons and 14 teeny-tiny neutrons. And 14 teeny-tiny electrons go around the nucleus. It doesn’t really look exactly like this diagram but you get the idea. Shutterstock

When sunlight falls on a solar panel it can hit one of the electrons in a silicon atom and knock it free.

These electrons can move around but because of the special way the cell is made they can only go one way, up towards the side that faces the Sun. They can’t go the other way.

So whenever the Sun is shining on the solar cell it causes many electrons to flow upwards but not downwards, and this creates the electric current needed to power things in our homes such as lights, the television and other electrical items.

At night, the solar panel produces no electric power and we need to rely on batteries or other sources of electricity to keep the lights on.

How are solar cells being used? 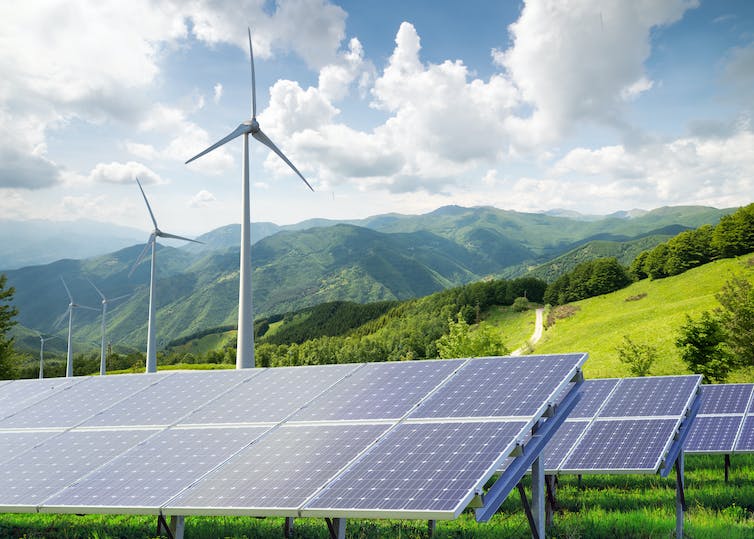 Solar and wind are helping lessen the amount of greenhouse gases which damage our Earth. They are cheap, and they continue to get even cheaper and the more we use it the quicker we can stop using energy that can hurt the Earth (like coal, oil and gas).

What’s more, silicon is the second most common atom in the world (after oxygen). In fact, sand and rocks are made of mostly silicon and oxygen. So, we could never run out of silicon to make more solar cells.

Read the full article at The Conversation