I wish! In books and movies, our favourite characters can use “time-turners” and treehouses to travel through time. Unfortunately, it isn’t that easy for people in real life. Let’s look at why.

First, there are two types of “time travel”: going back in time, and going forward in time. 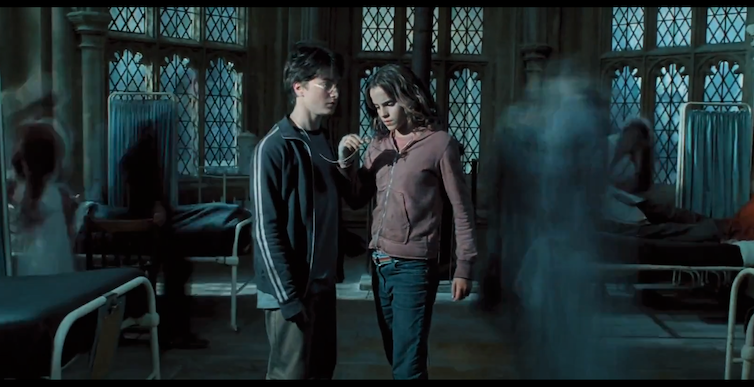 In the film Harry Potter and the Prisoner of Azkaban, characters Harry and Hermione use a time-turner to go back in time. Warner Bros. Pictures

Travelling to the past

Say you broke your arm falling off the monkey bars. What if you could travel back in time and tell yourself to not go on the bars? If you were successful, you’d never fall and break your arm. But then you would have no reason to travel back in time. So what does this mean for your arm? Did it break, or not?

If thinking about this makes your head hurt, you’re not alone.

Time travelling is a confusing idea for most people. That’s because when we think of time, we think about it as going in a straight line, with one thing happening after another.

If we could travel back in time and change something that happened before, we would then change the order of that line. This would mean breaking a rule called “causality”.

Causality is the rule saying that a “cause” (your actions, for instance) happens before an “effect” (the result of your actions). In our monkey bar example, the cause is falling, and the effect is breaking your arm – which happens because you fell.

Causality is one of the unbreakable rules of the universe. Breaking it would have nasty consequences for the universe and all of us. Experts think that because the universe has this rule, travelling to the past must be impossible otherwise the rule would be broken all the time.

Travelling to the future

If going to the past is impossible, can we go forward in time to the future?

Well, technically we’re already travelling forward in time, because time is passing. Every second we travel one second into the future. But this happens to everyone, so it’s not really time travel, right?

Well, believe it or not, two people can feel time at different rates. Time passes differently for someone who is moving fast, compared to someone who is staying still. This is a very complicated idea called “time dilation”.

Someone flying from Sydney to Melbourne will feel time pass more quickly than someone waiting for them at the airport without moving, while the flight was in the air. So why don’t we notice this difference?

It’s because you have to be moving much, much faster than an aeroplane before you start to notice time dilation. Even if you flew all the way around the world, the time would only feel about a billionth of a second different to someone who stayed home.

The only way scientists even know about time dilation is because of amazingly accurate experiments that have measured it.

Unfortunately, this still can’t help us “time travel”. If you flew around the world for more than four million years, people on the ground would only have experienced one more second than you!

How fast can we go?

So if it’s all down to speed, the answer must be to go faster, right? If you could go fast enough for long enough, hundreds of “human” years could slip by on your journey, meaning you would feel like you were travelling into the future!

Unfortunately, a fast enough speed to do this would be close to the speed of light, which is the fastest speed anything can go. Light travels at about one billion kilometres every hour – that’s very, very fast.

All of this means that if humans want to visit the future, we’ve got a long, long way to go. 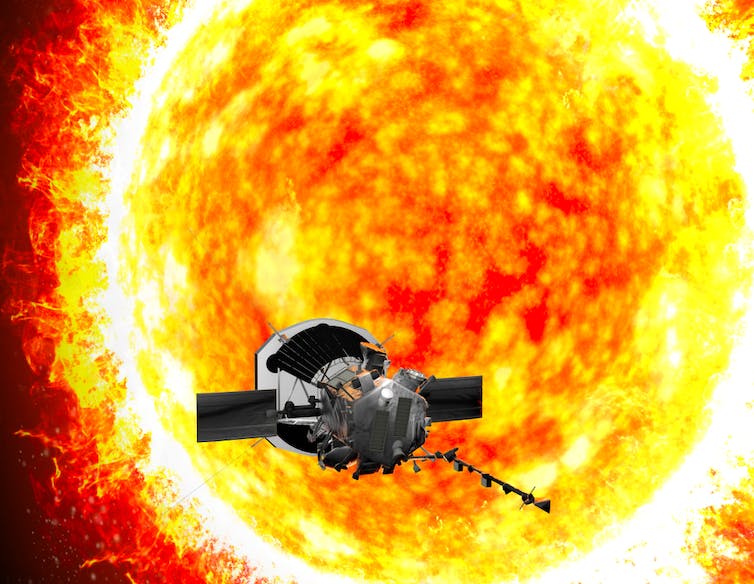 NASA’s Parker Solar Probe can go as fast as 692,000km per hour. Shutterstock

Looking back to the past

Ok, so we can’t time travel. But we can see into the past, every night.

Light has a fixed speed, as we just learned. It’s really, really fast, but things in the universe are so far apart that it still takes a long time for light to reach us from faraway stars and planets.

The nearest galaxy to our Milky Way is the the Canis Major dwarf galaxy, which is 25,000 light years away. This means it takes the light 25,000 years to get here!

When we look at this galaxy through a telescope, we’re actually seeing it as it was more than 25,000 years ago. So although we can’t time-travel ourselves, we can look up to the sky and see the past every night.

Read more: Time travel is possible – but only if you have an object with infinite mass

More About The Future of Work