Curious Kids: what does the Sun’s core look like?

We are about to take a journey to the centre of the Sun. The action begins about 148 million kilometres from our planet when we arrive at the Sun’s surface in our space ship.

It’s hot here at the surface, about 5,700 degrees Celsius, and the light is brilliant and blinding. As we look closer, the surface appears to bubble, just like boiling water. Some of the bubbles look darker than the others. The darker bubbles are slightly cooler than the rest, but every inch of the surface is still blisteringly hot.

Read more: Curious Kids: how are stars made?

From zone to zone

We continue on our journey, diving through one of these giant bubbles on the surface, and head towards our first stop: the convective zone.

Surrounding us is a hot fluid called plasma, filled with bubbles by the constant movement of hot gases rising and cool gases falling. The bubbles are moving, growing and shrinking. Some are even popping as our space ship travels down further, rocking from side to side like a boat in a high sea.

After travelling down for 200,000 kilometres (that’s about 15 times the width of the whole Earth!) the rocking finally stops. We’ve made it to our second stop, the radiative zone.

This part of the Sun is very hot. It is now 2 million degrees outside our space ship. If we could see individual light particles, called photons, we’d see them bouncing between the tiny particles, called atoms, that make up the plasma.

These bounces forwards and backwards and from side to side make up a dance scientists call a “random walk”. It can take one photon hundreds of thousands of years to randomly walk its way out of this layer.

Our spaceship is going full speed ahead, so we move through it much more quickly.

The weight of all the plasma above us pressing down means the plasma around us is denser than gold, and the temperatures are soaring up towards 15 million degrees! We have almost reached the final stop on our tour, the Sun’s core.

Welcome to the core

Before we enter the core, we’re going to have to shrink down to the size of an atom. It is the only way we will get to see what is happening in here, because what we are trying to see in here is atoms, millions of times smaller than a grain of sand!

The core of the Sun is home to billions and billions of atoms of hydrogen, the lightest element in the universe. The immense pressure and heat pushes these atoms so close to one another that they squish together to create new, heavier atoms.

This is called nuclear fusion. The hydrogen atoms that get squished together form an entirely different substance called helium. 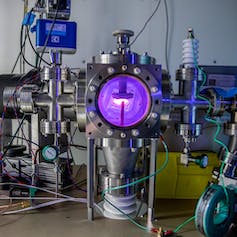 So now that we are in the core of the Sun, what does it actually look like? Not only is everything blindingly bright, but it just might have a pretty pink colour!

When atoms merge together, they release large amounts of energy in the form of light. The light works its way up through the core, into the radiative zone where it bounces around, until it finally makes it into the convective zone. Then the light travels up to the surface of the Sun through massive bubbles of plasma, and from the surface it is free to travel uninterrupted through the sky.

It’s time to leave the hottest place in our solar system and head back to Earth. Our journey has taken us 700,000 kilometres deep into the interior of the Sun, past the bubbles of the convective zone, through the billions of the light rays in the radiative zone and into the mysterious atom-fusing core.

As we land back on Earth and look towards the Sun in the sky, it’s almost like looking back in time. We know now the light we are seeing was created hundreds of thousands of years ago, in the hottest place in the Solar system!