Deep-sea fish found to be warm-blooded 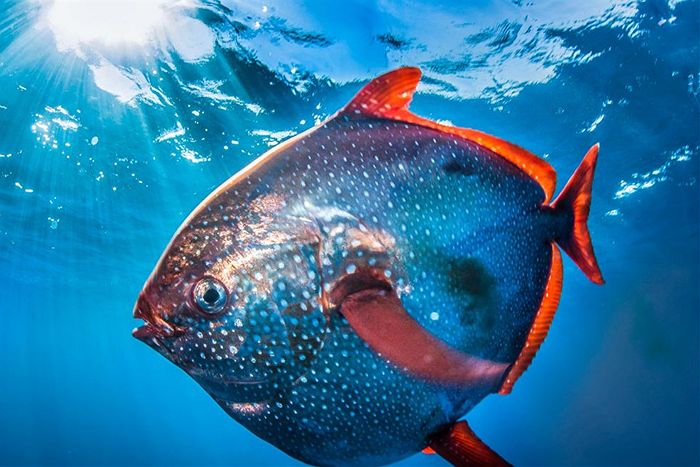 Calling someone a “cold fish” may not hold any more after scientists have revealed a deep-sea fish that is warm-blooded.

While it was previously known that the opah (Lampris guttatus) could heat its eyes and brain, a paper published in Science shows it can also heat its entire body. This makes the opah the only known fish species to be whole-body endothermic, or warm-blooded.

Dr Nick Wegner, who co-authored the study, says this trait gives the opah distinct advantages as a deep-sea predator.

“It will increase its performance in cold environments – it can swim faster, has faster reaction times and better visual resolution than a lot of its prey,” says Wegner, a fisheries research biologist at the National Marine Fisheries Service in California.

The opah Lampris guttatus has a global range that includes the southern waters of Australia and swims at depths between 10 and 450 metres.

It has a disc-like shape with large side or pectoral fins that can extend out by up to 25 centimetres and the fish can grow up to two metres and weigh 30 kilograms.

Wegner says the discovery was an “opportunistic find” after his friend and co-author Owyn Snodgrass sent him a sample of opah gills.

He recognised the presence of blood vessels that “weren’t supposed to be there” and describes the unique configuration he noted as a “counter-current heat exchange”.

Wegner says the fish initially produces heat through the flapping of its large pectoral fins, which warms up the body core.

As the warm blood leaves the core and travels toward the surface of the gills, it transfers its heat to the cold blood that is travelling back from the gills where it has absorbed oxygen from the water.

Wegner likens the system to a car radiator and says the exchange stops the heat from nearing the gill surface where it would be cooled by the water flow through the gills.

Further fatty tissue surrounds the gills, heart and muscle tissue where the opah generates much of its internal heat, insulating them from the frigid water.

The researchers found the opah was able to maintain body warmth of about 5 degrees Celsius higher than the surrounding water temperature.

“The fish aren’t warming up to the same degree as animals and birds,” says Wegner. “If the opah was swimming in waters at 10 degrees Celsius than its body temperature would be about 15 degrees Celsius.”

Interesting find
Museum of Victoria senior curator of Ichthyology Dr Martin Gomon says it is an interesting find and suggests it is likely the southern moonfish which is another species of Lampris would have the same feature.

Like the opah, Gomon says, the southern moonfish is known to be very active despite living in cold, deep waters.

“Opah belongs to a group of fishes that are oceanic so they have had a longer evolutionary history to develop this system,” Gomon says.

He says there are a number of different marine groups that have “gone down this evolutionary path” including some species of tuna and the Lamnidae family of sharks which includes the Great White.

But Gomon says these fish are only regionally endothermic – they can only warm parts of their bodies, such as muscles to enhance swimming performance, and the trait is temporary.

“The opah has a system where more of the body is kept warm and a high body temperature makes its entire physiological system more efficient,” he says.

“It is a more efficient predator and has the ability to go into deeper water.”

Wegner says he thinks the Lampris may be unique, but adds “if you asked me a few years ago if there was a fish that could warm its entire body I would have said no”.

“The discovery just shows how little we know,” he says.