When an animal sneezes, it’s their way of getting rid of annoying bits and pieces that have floated inside their nose and mouth.

While many animals, including humans, elephants, pandas and even seals, can sneeze, sharks unfortunately cannot. To be able to sneeze, an animal needs to move air (or water) from the lungs through its nose to the outside.

Sharks have two nostrils (called nares) below their snout that are used for smelling, but they don’t join up to the back of the throat like our nose does, so they can’t sneeze like we do. If something floats into their nares, they might try to shake it out. Shark nostrils are called nares, but they do their breathing through their gills at the back of the mouth. Flickr/Lwp Kommunikáció, CC BY


Sharks breathe through the gills at the back of the mouth. Most of their “smelling” is done using a process called chemoreception, which allows sharks to sense tiny pieces of stuff, called molecules, hiding in the water as they pass through their nares.

Sharks can find and recognise these molecules – like parts of blood – that have been released from wounded animals or other prey, because their sense of smell is much better than ours.

Nares are loaded with powerful sensors. Once a shark has locked onto a smell, it can then work out where it came from by swimming towards it and moving its head slightly from side to side. It’s a bit like us following the smell of a freshly baked cake. 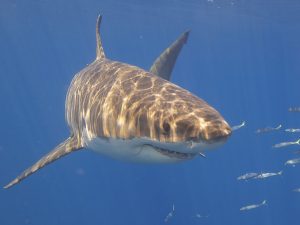 It’s an exaggeration to say a shark can smell a single drop of blood in the ocean. But they might be able to smell tiny drops of blood in the water from up to five kilometres away. Flickr/Elias Levy, CC BY

Legend has it that sharks can smell a single drop of blood in the ocean, but that’s an exaggeration. What they can do is detect blood at one part per million, which is similar to detecting tiny drops of blood in the water from up to five kilometres away!

While some have claimed to capture sightings of sharks sneezing on video, it just isn’t physically possible.

You might think this shark is sneezing, but trust me – it’s not.

The movement people confuse with sneezing is likely the animal’s attempt at getting rid of unwanted objects from their mouth or stomach area.

Sharks can actually make their stomach stick out of their mouth for brief moments to get rid of things they have eaten that they don’t like, such as tyres, licence plates, fish bones and fish hooks. This is called gastric eversion and it’s a very cool trick.

Gastric eversion is where a shark or other animal empties its stomach by making it stick out of their mouth.

Alternatively, a shark stretching its jaws, which they sometimes do after a meal, might be mistaken for a sneeze.

While sharks can’t sneeze like we do, they can smell and they have other great ways of getting rid of unwanted things from inside them.