The biggest killers of wildlife globally are unsustainable hunting and harvesting, and the conversion of huge swathes of natural habitat into farms, housing estates, roads and other industrial activities. There is little doubt that these threats are driving the current mass extinction crisis.

Yet our understanding of where these threats overlap with the locations of sensitive species has been poor. This limits our ability to target conservation efforts to the most important places.

In our new study, published today in Plos Biology, we mapped 15 of the most harmful human threats – including hunting and land clearing – within the locations of 5,457 threatened mammals, birds and amphibians globally.

We only mapped threats within a species location if those threats are known to specifically endanger that species. For example, the African lion is threatened by urbanisation, hunting and trapping, so we only quantified the overlap of those specific hazards for this species.

This allowed us to determine the parts of a species’ home range that are impacted by threats and, conversely, the parts that are free of threats and therefore serve as refuges.

We could then identify global hotspots of human impacts on threatened species, as well as “coolspots” where species are largely threat-free.

The fact that so many species face threats across almost all of their range has grave consequences. These species are likely to continue to decline and possibly die out in the impacted parts of their ranges. Completely impacted species certainly face extinction without targeted conservation action.

Conversely, we found more than 1,000 species that were not impacted by human threats at all. Although this is positive news, it is important to note that we have not mapped every possible threat, so our results likely underestimate the true impact. For example, we didn’t account for diseases, which are a major threat to amphibians, or climate change, which is a major threat to virtually all species.

This region contains the top five countries with the most threats to species. These include Malaysia, Brunei, Singapore, Indonesia and Myanmar.

The most impacted ecosystems include mangroves and tropical forests, which concerningly are home to the greatest diversity of life on Earth. 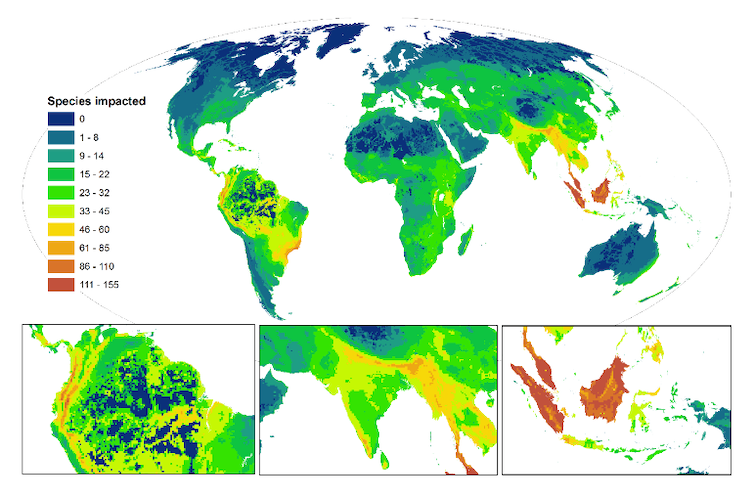 We also created a global map of coolspots by combining the parts of species ranges that are free from human threats. This map identifies the last vestiges of wild places where threatened species have shelter from the ravages of guns, snares and bulldozers. As such, these are crucial conservation strongholds.

Coolspots include parts of the Amazon rainforest, the Andes, the eastern Himalayas, and the forests of Liberia in West Africa.

In many places, coolspots are located near hotspots. This makes sense because in species-rich areas it is likely that many animals are impacted whereas many others are not, due to their varying sensitivity to different threats. 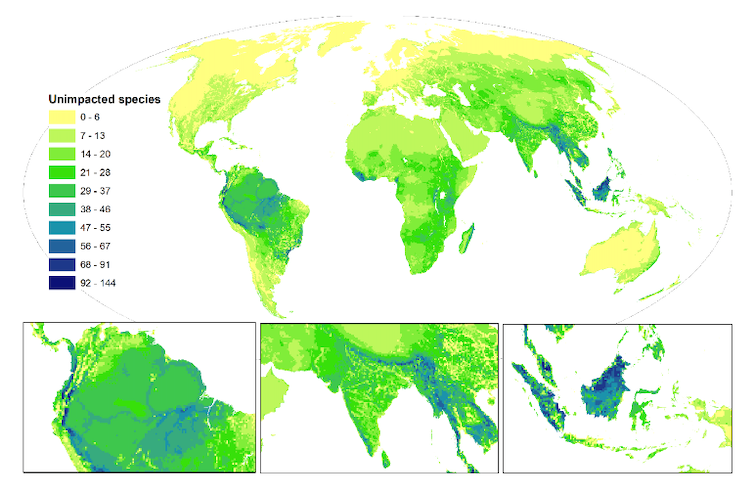 There is room for optimism because all the threats we map can be stopped by conservation action. But we need to make sure this action is directed to priority areas, and that it has enough financial and political support.

An obvious first step is to secure threat-free refuges for particular species, via actions such as protected areas, which are paramount for their survival.

To ensure the survival of highly impacted species with little or no access to refuges, “active threat management” is needed to open enough viable habitat for them to survive. For example, tiger numbers in Nepal have doubled since 2009, mainly as a result of targeted anti-poaching efforts.

Tackling threats and protecting refuges are complementary approaches that will be most effective if carried out simultaneously. Our study provides information that can help guide these efforts and help to make national and global conservation plans as successful as possible.

The authors acknowledge the contributions of Hugh Possingham, Oscar Venter, Moreno Di Marco and Scott Consaul Atkinson to the research on which this article is based.