What’s going to happen to the Sun in the future? Will it explode?

That’s a fantastic set of questions – and I’ll try to answer all of them. I’ll start with the last, and work backwards from there.

When the Sun does reach the end of its life, it won’t fall to Earth – but we’ll come to that in a moment.

Although people like to imagine that shooting stars are stars falling from the heavens, they’re actually just bits of dust, burning up harmlessly way overhead. 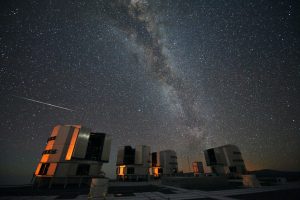 A meteor (or ‘shooting star’) burning bright over the telescopes at Chile’s Paranal Observatory. It is not a star falling to Earth – but a beautiful sight nonetheless. ESO/S. Guisard

On any clear night of the year, if you go outside and watch the sky, you will eventually see a few shooting stars (“meteors”). But on some nights, you can see tens, or even hundreds per hour. Here’s a calendar of the year’s best “meteor showers”, if you want to know when to look, and here’s an Explainer, if you want to learn more about meteors.

Is the Sun getting closer to the Earth? The orbits of Mercury, Venus, Earth and Mars, are all a bit ‘egg-shaped’ – but if you came back in a billion years, the planets would still be moving on almost the same orbits, at the same distances from the Sun. Danial79/Wikipedia

The change in distance is small compared to the size of Earth’s orbit, though – and overall, the average distance from the Earth to the Sun now is no different to what it was when the dinosaurs walked the Earth.

What is going to happen to the Sun in the future? Will it explode? Will it burn out?

The Sun won’t explode. Some stars do explode at the end of their lives, an explosion that outshines all the other stars in their galaxy added together – something we call a “supernova”. That spectacular fate only happens for the most massive stars, however. Smaller stars like the Sun follow a different route to their end.

The first thing that will happen to the Sun will happen really slowly. The Sun is currently middle-aged, having celebrated its 4,568,000,000th birthday at some point in the last million years.

Over that time, the Sun hasn’t really changed much – but it has gradually got a bit brighter. That brightening will carry on into the future – and eventually the Earth will get so hot that the oceans will boil!

Don’t panic, though – that won’t happen for at least another five hundred million years.

Eventually (in five or seven billion years time), the Sun’s life will come to an end.

Our star will swell up, becoming something called a “Red Giant” star. It might even get so big that it swallows the Earth whole. As it swells, it will cool down, shining red or orange, like the bright star Betelgeuse in the constellation Orion. Betelgeuse, a red supergiant star, shines brightly at the left-hand shoulder of Orion. Betelgeuse is a much more massive star than the Sun, and when it dies (in the next million years) it will explode as a supernova! Rogelio Bernal Andreo

That stage of the Sun’s life will last just a few million years, at most. Then, the Sun will die. Not with a bang, but more of a whoosh.

The outer layers of the Sun will blow away, off into outer space, leaving behind its core – a glowing ember the size of the Earth called a White Dwarf star. That ember will gradually cool and fade, until eventually, billions of years in the future, it will go dark.

The Sun’s death will be really spectacular – if you’re watching from far enough away. As the Sun’s outer layers blow away, they will form something called a “Planetary Nebula”. That nebula will only last a few tens of thousands of years – a short but beautiful farewell to our wonderful star. The Helix Nebula. The faint star at the nebula’s centre was once like the Sun. Now all that remains is a white dwarf, surrounded by an ever-expanding shroud of atmosphere, blown off into space. NASA, ESA, and C.R. O’Dell (Vanderbilt University)
How do we know all this? We have never watched this process happen in real time, but astronomers can see various stars at different stages of this process and are able to piece together the chain of events that way. Being an astronomer is a bit like being a detective – you have to gather clues and use them to work out what has happened (and what will happen in the future).

Read the full Article on The Conversation