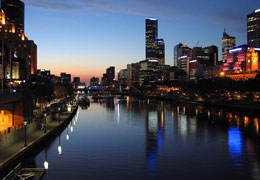 The Yarra River. It begins its journey in Mt Baw Baw on the southern slopes of the Great Dividing Range and meanders down through forested valleys, past native birds and animals grazing and feeding along its banks and dipping into its flowing waters for a drink.

Its passage then turns towards Melbourne, where its waters begin to lose their sparkle as its riverbanks turn from trees to concrete, and its creeks turn to drains. Its final stages of its journey see the river pass through Melbourne’s ports and oil refineries.

It concludes its journey muddy, full of pollution in Port Phillip Bay.

Not much of a finale for the most famous river in Victoria.

It wasn’t always this way.

Before European settlement, the Yarra River was a major food source and meeting place for local indigenous people, the Wurundjeri people.

European arrival and the establishment of Melbourne in 1835 saw big changes to the River, and actions such as land clearing and cattle grazing forced the Wurundjeri into new territories, away from the river.

The Wurundjeri people called the river Birrarung. When the Europeans arrived it was given the name Yarra Yarra by John Helder Wedge of the Port Phillip Association, in the mistaken belief that this was the Aboriginal name for the river.

However it is now acknowledged that Yarra means ‘waterfall’ or ‘flow’, descriptive of any river or creek in the area, not just the Yarra. The Yarra River that the first Europeans encountered was vastly different to the river that we see today. Its shores were lined with gums, wetlands and grasslands, with creeks and falls joining the river, and falls frequently breaking its flow.

On the shores where Southbank now stands, a marshland was alive with birds, turtles, frogs and insects. A small waterfall broke the river in front of the Southbank complex, and the shores opposite met the slopes of a wooded hill, where now you’ll find the tall city buildings.

Since the arrival of Europeans, Melbourne’s landscape has been changed dramatically.

The Yarra’s course has been progressively disrupted and the river widened in places.

Beginning with the Victorian gold rush (1850s and 60s), it was extensively mined and had numerous bridges built to facilitate the growing transport needs. Its marshlands were covered over to prevent flooding, and its creeks circled in concrete to accommodate developments.

Despite these changes, the Yarra River remains an important water source for Victorian industry and agriculture. It also remains a popular tourist site, as well as a spiritual destination for many Victorians, both indigenous and non-indigenous.

The Yarra is suffering. Water quality has declined dramatically in the lower reaches: if you’ve ever taken a stroll along the Yarra where it flows through the city you’ll see that the water is murky with a brownish-green tinge and that all sorts of rubbish litter its banks.

These murky waters are a result of two separate, but equally important issues: 1. water quality, and 2. the level and frequency of flows.

The issue of the frequency and level of flows is becoming increasingly important for the Yarra. In an average year about 70 % of Melbourne’s water comes from our Yarra River. Urbanisation, land clearing and extraction for urban and agricultural uses has led to reduced flows in most waterways in the Yarra catchment. Any drought now amplifies these issues. As a result, many creeks in the catchment are considered to be heavily flow stressed.

It wasn’t always this way: these images show the Yarra as being clean enough to swim in!

And why is this bad news? Healthy rivers need regular flows to improve river bank vegetation health which slows erosion, provide habitats for fish and waterbirds to feed and breed, fill aquifers, dilutes salty water left in wetlands and billabongs, and provides soil moisture for aquatic and riverbank plants to grow.

Which leads us to our second point: the quality of the water is already in a bit of strife, especially where the river meets the city.

Recent water quality in these areas tests point to high concentrations of E-coli, indicating contamination in the river. This contamination is mainly caused by poorly operating and old-fashioned sewerage systems. Poor management of general waste, including rotting food also contributes. On top of that, up to 350,000 cigarette butts enter the Yarra every day via stormwater drains.

It’s not all bad: native plants and endangered or threatened species can still be found in many stretches, although without protection the future of these species is uncertain. As well as that, many good people are putting their good hands to work to improve the quality of the Yarra for the good of our environment. This work has seen a general improvement in water quality. A good deal of this can be attributed to improvements in sewerage infrastructure, regulation against discharges to waterways, and works to prevent erosion.

However, more needs to be done.

‘We forget that the water cycle and the life cycle are one.’

Want to learn more about water?