What plants could grow in the Goldilocks zone of space?

Imagine a planet like the Earth, orbiting a distant star. Could that planet have life? Well, life on Earth (the only life we know) needs liquid water. So to find life on another planet, we think that that planet would have to be “just right”. The ‘Goldilocks Zone’ for the Solar system and the TRAPPIST-1 system. Too close to the star, you’d be too hot (red). Too distant, and you’d be too cold (blue). In between, things might be just right for liquid water… NASA/JPL-Caltech


We still haven’t discovered life on any other planet, so we can’t say for sure what such life would be like. One thing is certain, though – alien life will be very, very different to anything on Earth.

We can try to imagine plants that could live on other planets based on the facts we do have. Using your imagination like this is a very important part of being a scientist, trying to explore the vast ocean of the unknown.

One thing we’ve learned over the last 20 years is that planets are everywhere. Almost every star has planets – so there are more planets in our galaxy than there are stars.

“Goldilocks planets” could be bigger or smaller than the Earth. Smaller ones have weaker gravity, so you would weigh far less there than on the Earth. Plants (and animals!) growing there could easily be much taller than on Earth, since it would be easier for them to grow up!

On a bigger planet, more massive than Earth, plants would probably be much shorter – thanks to the stronger gravity on such a world. We can work out how strong gravity would be on different planets. This cool website lets you work out how much you would weigh on other objects in the Solar system, for example. 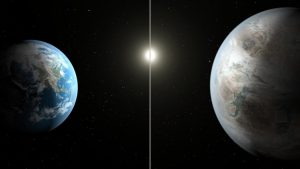 On the left, the Earth. To the right, Earth’s bigger cousin. On a more massive planet, gravity would be stronger – which would have a big effect on any life that evolved! NASA/JPL

Also, not all planets are equally wet. Some are likely dry, desert worlds, while other “Earth-like” worlds might have oceans tens, or hundreds of kilometres deep. What kind of plants could grow on those desert or water worlds?

If a “Goldilocks planet” had a thin atmosphere (like Mars), even the strongest winds would push more gently than a soft breeze here on Earth. Any plants probably wouldn’t need to be very strong to protect against bad weather. With a really thick atmosphere, though, winds push harder – and any plants in those conditions would have to evolve to be really tough.

And then we get to light. Plants on Earth have evolved to use the light from the Sun to get their energy, using a chemical called chlorophyll. It absorbs blue and red light, but reflects green light. 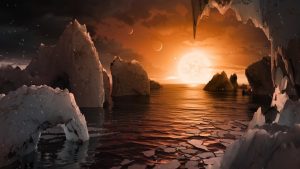 Sunset on a planet around a red dwarf star. What kind of life would thrive under a red Sun? NASA/JPL-Caltech

That chemical is really useful for Earth plants, because the Sun gives off lots of energy in the blue and the red. But imagine a dull, cool, red star. That star would be red because it doesn’t give off much yellow or blue light – and so plants using chlorophyll would starve!

But there are probably lots of other chemicals that plants on those worlds could use to live under their own suns. There may even be life on planets out there with more than one sun – with each star a different colour in the daylight sky! 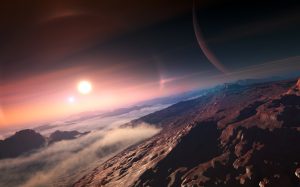 A world with two suns, orbiting a giant planet (like Jupiter). What kind of life could thrive on such a world? IAU/L. Calçada

Plants on other planets are bound to be even weirder than the strangest ones we find on Earth – and probably stranger than we can even imagine!