School holidays are here again and if you’re looking for ways to keep smart kids engaged and happy, Imagine This has got you covered.

A co-production between ABC KIDS listen and The Conversation, Imagine This is a podcast aimed at kids aged 4-7 — but really it’s a delight for humans of any age.

Based on The Conversation’s Curious Kids series, each episode features host Brianna Peterson going on an audio adventure to find answers from experts on important kid questions like: How do we smell? Why do birds sing? And why do volcanoes erupt?

Season Three of Imagine This launched this week, with an episode on where dreams come from (and you can read the accompanying article here), and a new episode will be released every Wednesday.

You can find Imagine This in your podcast app, and read all our Curious Kids articles over here. Happy listening, happy reading and happy holidays. Tigers have whisker hairs even on their front legs and chin! thedigme/flickr

Curious Kids: why do tigers have whiskers?

Whiskers are not just ordinary hairs. They are thicker and go deeper into the tiger’s skin and send messages to its brain about what is happening in the world around it.

Curious Kids: is it true dogs don’t like to travel?

Travel can come with danger, so dogs have mostly evolved to avoid being over-adventurous. That said, dogs may see some kinds of travel as a chance to find things they want — like food or a mate.

Curious Kids: do cats and dogs understand us when we miaow or bark?

When it comes to their own “voices”, studies show that cats and dogs use different vocal signals to communicate different messages.

Curious Kids: why do we have fingernails and toenails?

The short answer is we have evolved to have nails because they help us pick things up (like food) and pick things off (like bugs).

Curious Kids: what is a headache? Is it our brain hurting?

The brain itself can’t actually feel pain. It can’t sense damage to itself the way your finger can. We know this because people can have brain surgery while they are totally awake.

Curious Kids: how does my tummy turn food into poo?

Your stomach works very hard with some other body parts to break down food into small pieces. Your body takes in what it needs and the rest is turned into poo.

Curious Kids: how much does a brain weigh?

An adult brain weighs about 1.5kg. It’s mostly water with some fat, protein, sugar and a dash of salt. Sounds like pancakes, I know, but I once tried chicken brains and, well, pancakes are tastier.

Your tongue, saliva and nose work together to help you taste your food.

Shooting stars are not stars at all. They are tiny space adventurers who accidentally wander into our sky and get sucked toward us by Earth’s gravity. Here’s the story of a shooting star’s journey.

The northern lights might look like magic, but they can actually be explained by science – here’s how.

Curious Kids: how does heat travel through space if space is a vacuum?

There are three ways heat can be shared:  conduction, convection and radiation. Find out which one lets heat travel through space.

Curious Kids: what are meteorites made of and where do they come from? 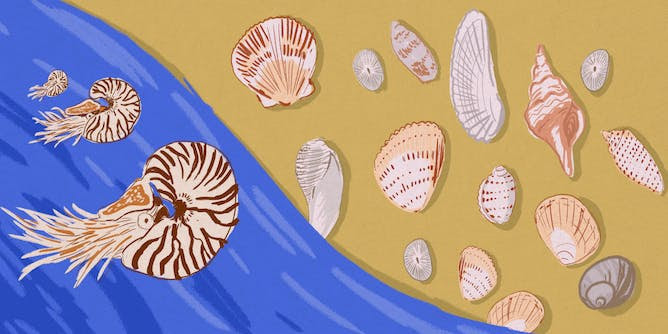 A few days after baby molluscs come out from tiny eggs, they start building their shell layer after layer.Emily Nunnell/The Conversation NY-BD-CC

Curious Kids: how do shells get made?

Molluscs that have shells – like pipis, clams and oysters – have to build their own shell from scratch. And they keep building it their whole life, using chemicals from the sea and their own bodies.

Curious Kids: how do creatures living in the deep sea stay alive given the pressure?

The pressure in the deepest part of the ocean can be 1,000 times greater than the pressure we experience at sea level – but creatures that live and visit there have some very special features.

Curious Kids: how do currents form under water?

It’s good to know how currents are formed in the ocean, as they can be quite dangerous!