What an interesting question! There are a few possible answers.

A lot of animals (including many humans) think these shellfish are pretty tasty, so they need shells to protect them from hunters who want to eat them.

Some fish can pick up the shell in their mouths and smash it open against a rock. Other animals, like octopuses and snails, can drill a hole into the shell and inject poison that can kill and digest the animal that lives inside. 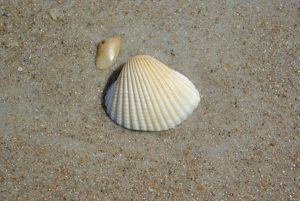 Corrugated shells are strong, but smooth shells are fast. Not always fast enough, though – a hunter has drilled a hole in this little shell to suck the animal out. Flickr/Chris Luczkow , CC-BY-SA

They then suck the digested animal out through the hole they drilled, much like you might suck up a drink through a straw. Having a strong shell may help protect the mollusc living in the shell from these kinds of attack.

It is possible that the corrugations may help strengthen these shells. Have you ever seen a corrugated iron roof on a house? Corrugating it strengthens the iron and makes the roof stronger. Scientists think perhaps that is also true for corrugated shells. Corrugation makes something stronger – that’s why humans often use corrugated iron for the roof of a house. Flickr/Michael Coghlan, CC BY

Scallops have a fan-shaped corrugated shell which is hard to break, even if you drop it or hit it. These corrugations are called ribs and provide scallops with strong and rather heavy shells. Here are some scallop shells from the US. Flickr/california academy of sciences geology., CC-BY

The corrugations may also help with camouflage. Other animals and plants can grow on their shells, making the scallops masters of disguise! But when camouflage does not work, scallops can swim in a clumsy way by opening and closing their valves quickly.

Scallops can swim – they often look a bit funny when they do it!

Giant clams do not move or dig themselves into the sand. Their main strategy for protection is to grow super strong, thick and heavy shells and, as you can see, these also have corrugations. Giant clams are the largest clams in the world. They can reach up to 1.2 metres in length (around the height of a six-year-old kid!), weight more than 200 kilograms and can live for more than 100 years. A giant clam’s main strategy for protection is to grow super strong, thick and heavy shells. They must be doing something right because they can live for more than 100 years. Joao Inaco, Author provided

The animals that have smooth shells use a different approach to protect themselves from other animals. They can move away quickly and dig themselves into the sand really fast! It is like sliding in the playground; having a smooth shell would make it easier for these animals to move more quickly, just like a smooth slide would let you go faster than a bumpy slide.

Look how fast this pipi can dig down!

Pipis use their foot to dig down. Maybe their smooth shells help them go faster.

Clams with smooth shells (including pipis) can dig themselves into the sand in just a few seconds! They use their foot (which looks more like a tongue) for digging. And they use their long siphon to breathe when burrowed, much like you would use a snorkel to breathe when you are underwater.

This way, they are protected but are still able to feed and breathe.

Clams don’t have brains, but they can dig fast using their foot (which looks like a tongue).

Animals can use many different strategies to protect themselves. It is likely that many of these animals evolved to have different types of shells that are good – in different ways – at keeping the squishy animals inside safe and sound.

Read the full article on The Conversation