The good, the bad and the ugly: the nations leading and failing on climate action

This piece is part of Covering Climate Now, a global collaboration of more than 250 news outlets to strengthen coverage of the climate story.

It is almost five years since the landmark Paris deal was struck. Nearly 200 countries agreed to work towards limiting global warming to 1.5℃, beyond which the planet is expected to slide irreversibly towards devastating climate change impacts.

But few nations are on track to reaching this goal. Right now, we’re heading to warming above 3℃ by 2100 – and this will have catastrophic consequences for the planet.

United Nations Secretary-General António Guterres has called a major climate summit in New York on September 23, where countries are expected to announce more ambitious climate targets than they set in Paris, and solid plans to achieve them.

Ahead of the summit, let’s take stock of the world’s best and worst performers when it comes to tackling the climate emergency. 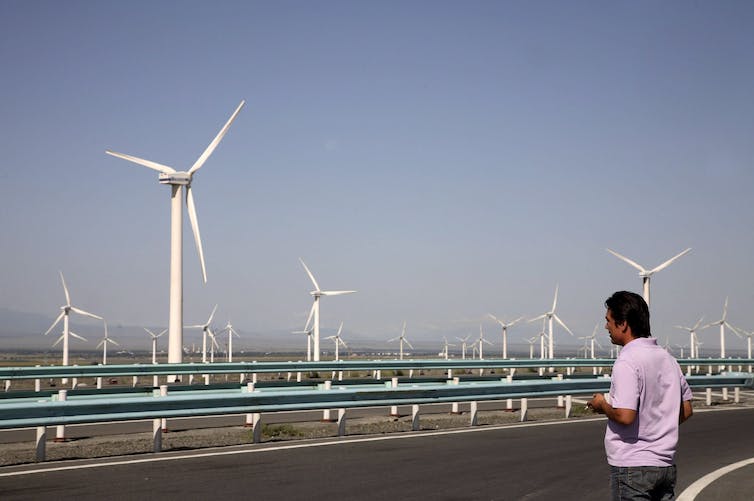 A man standing near a wind farm near Urumuqi, China. Qilai Shen/EPA

The Climate Action Tracker is an independent scientific analysis produced by two research organisations tracking climate action since 2009. It monitors 32 countries, accounting for more than 80% of global emissions.

We looked in detail at who has made the most progress since 2015, and who has done the least. Australia sits firmly in the group of governments we labelled as actually delaying global climate action, alongside the United States (which under President Donald Trump has walked away from the Paris agreement altogether).

Other countries delaying global climate action with highly insufficient targets and no progress since 2015 are the Russian Federation, Saudi Arabia, the United Arab Emirates, and Indonesia. 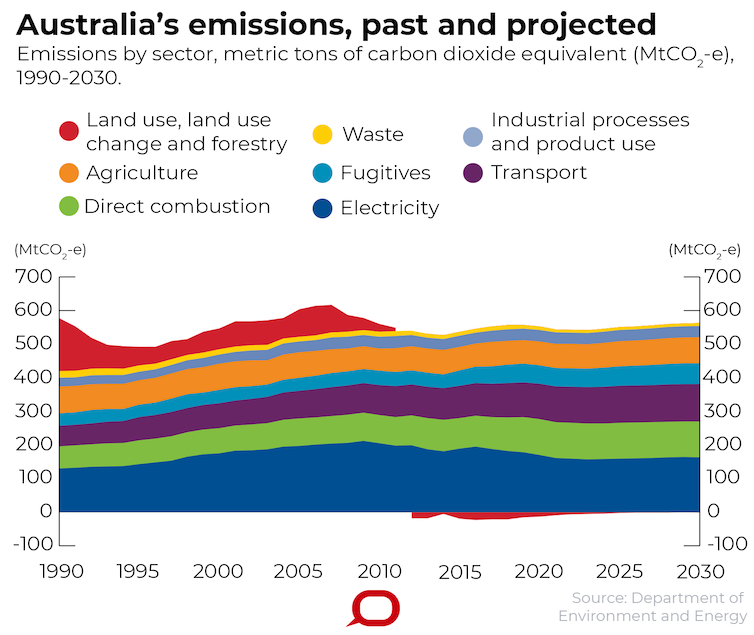 Today, Australia’s emissions are at a seven-year high, and continue to rise. The government’s commitment to fossil fuels remains unwavering – from coal projects such as Adani’s proposed Carmichael mine in Queensland to huge new gas projects.

Ethiopia, Morocco and India top the list of countries doing the most to tackle climate change. In total, eight international jurisdictions have made good progress since 2015, including the European Union, Canada, Chile, Costa Rica, and Argentina (although they still have a lot of work ahead to meet the 1.5℃ goal).

While India still relies on coal, its renewables industry is making huge leaps forward, with investments in renewable energy topping fossil fuel investments. The country is expected to over-achieve its Paris Agreement target. 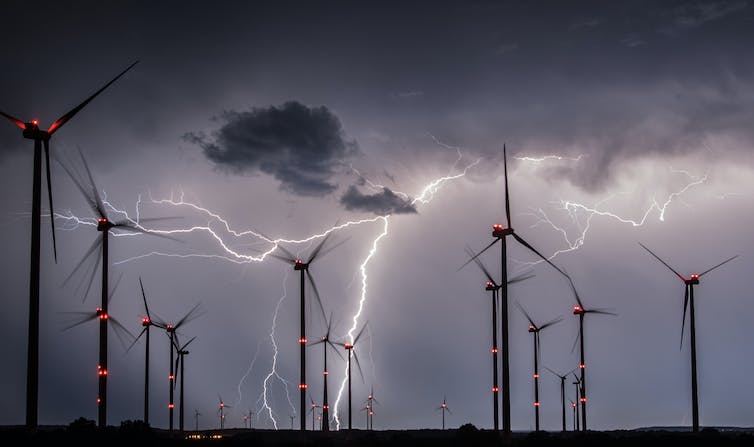 Lightning in the night sky over the Odervorland wind farm near Sieversdorf, Germany. Patrick Pleul/DPA

So what are they doing right? Costa Rica’s national decarbonisation plan covers the entire economy, including electrifying the public transport system, and huge energy efficiency measures in the industry, transport and buildings sectors. Costa Rica has also put a moratorium on new oil production.

The EU is set to overachieve its 2030 target of reducing emissions by 40% below 1990 levels by 2030 and is in the process of considering an increase in this to at least 50%. It has recently increased its renewable energy and energy efficiency goals, and is sorting out its emissions trading scheme, with prices of emission units increasing.

This, together with past investments in renewable energy, have helped to achieve a 15% reduction in German electricity sector emissions in the first half of 2019. Whilst Germany has missed its 2020 targets, it has begun a process to phase out coal no later than 2038 – still a number of years too late for a Paris-compatible pathway.

An increasing number of countries are adopting net zero emissions targets, many of them in the European Union, and some outside. Some, like the UK, have dumped coal, and are well on the way to achieving those targets.

A global phase-out of coal for electricity is the single most important step toward achieving the 1.5℃ warming limit. At the latest, this should be achieved by 2050 globally, by 2030 in the OECD and 2040 in China and other Asian countries.

There are some signs of optimism here. On one estimate, the number of coal projects in the pipeline shrunk by nearly 70% between 2015 and 2018, and investors are increasingly wary of the technology. Yet coal is still set to boom in Indonesia, the Philippines, Japan and Turkey. 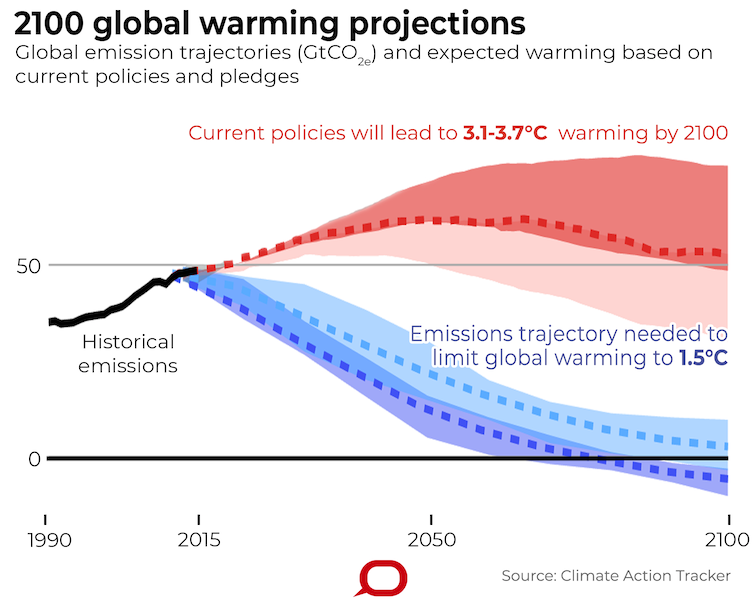 Under current polities, the world is set for more than 3°C of warming by 2100. Climate Action Tracker

Renewable energy is the key to unlocking rapid decarbonisation. It already supplies more than 26% of global electricity generation and its costs are dropping rapidly. To accelerate this fundamental transition, more governments need to adopt and improve policies that enable renewable technologies to be rolled out faster. This would contribute to low-carbon economic development and job creation.

Nowhere is the alarming rate of global deforestation more obvious than in Brazil, now in the middle of a record fire season. It adds to damage wrought by President Jair Bolsonaro who has weakened his country’s institutional framework preventing forest loss.

In 2018, Brazil recorded the world’s highest loss of tropical primary rainforest of any country – 1.3 million hectares – largely in the Amazon. The deforestation reached 7,900 square km in 2018, a 72% increase from the historic low in 2012. 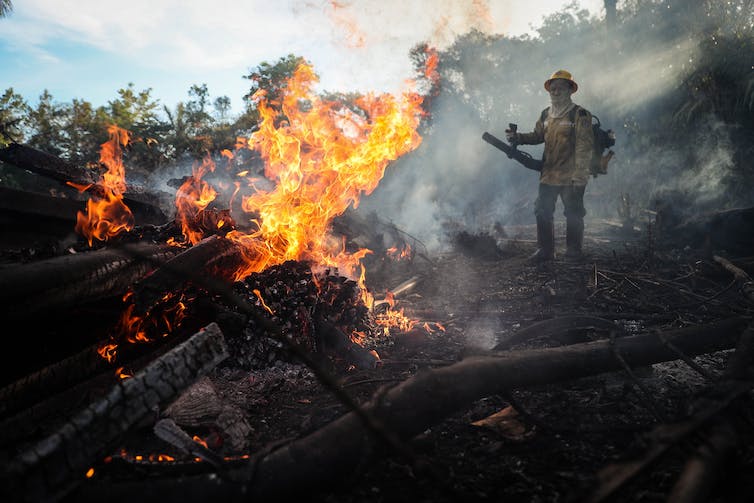 The past few weeks have shown us what 1℃ of global warming means. Hurricane Dorian, fuelled by high sea-surface temperatures, wiped out the northern Bahamas. Temperatures in the 40s set records across Europe. And in Queensland, the earliest fire season on record destroyed homes and razed rainforests.

The world can avoid this, but time is running out.