Lord Howe Island is approximately 600km east of Port Macquarie in NSW. It is a World Heritage site with high biodiversity, including seabird nesting sites, flightless birds such as the Lord Howe Woodhen, and the world’s rarest insect, the Lord Howe Island Phasmid. Approximately 75% of Lord Howe Island’s original natural vegetation remains intact and undisturbed. Likewise, its beaches, coral reef and marine environment are pristine. These conditions make Lord Howe Island an excellent place to observe evolution, in particular: natural selection, speciation, and the impact of introduced species on native flora and fauna.

Because of its isolation and size, Lord Howe Island makes for an interesting study site into adaptation and evolution as there is little interference from external forces. However, the size and remoteness of Lord Howe Island have also made it vulnerable to the few external forces that have made it to the Island. These include rats and mice who have caused considerable damage to the ecology of the Island. However, eradication programs have seen both these species removed from the Island. These programs are a demonstration of the work that can be done to preserve and conserve precious habitats and the value of engaging local communities in these programs to ensure success.

In the lessons in this unit, students will explore the geographical and ecological features of Lord Howe Island, the work involved in eradicating invasive species, and the unique evolution and speciation that has occurred amongst the island’s flora and fauna.

With thanks to Ian Hutton 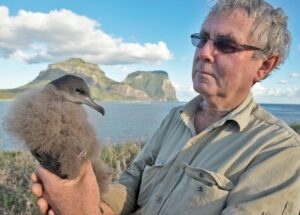 Ian is a trained biologist, amongst many other skills, and has been living on Lord Howe Island since 1980. He is the author of 11 books on Lord Howe Island, including the most recent 264 page beautiful coffee table book on the World Heritage values of Lord Howe Island, contributed to some 60 papers and articles working with scientists across numerous fields, run a number of conservation and research project, and has been employed as a location guide for film documentary projects. If you are visiting Lord Howe Island, get in touch with Ian for a private guided tour, as he is keen to share his passion for the island and its environment.