We composted ‘biodegradable’ balloons. Here’s what we found after 16 weeks

After 16 weeks in an industrial compost heap, we unearthed blue and white balloons and found them totally unscathed. The knots we spent hours painstakingly tying by hand more than four months ago were still attached, and sparkly blue balloons still glinted in the sun.

These balloons originally came from packages that advertised them as “100% biodegradable”, with the manufacturers assuring they were made of “100% natural latex rubber”. The implication is that these balloons would have no trouble breaking down in the environment.

Holding perfectly intact balloons in our hands after four months in industrial compost, we had cause to question these claims, and ran experiments.

This problem is two-fold. First, balloons are additional plastic waste in the environment. They are lightweight and can travel on air currents far from the point of release. For example, one 2005 study found a balloon travelled more than 200 kilometres. 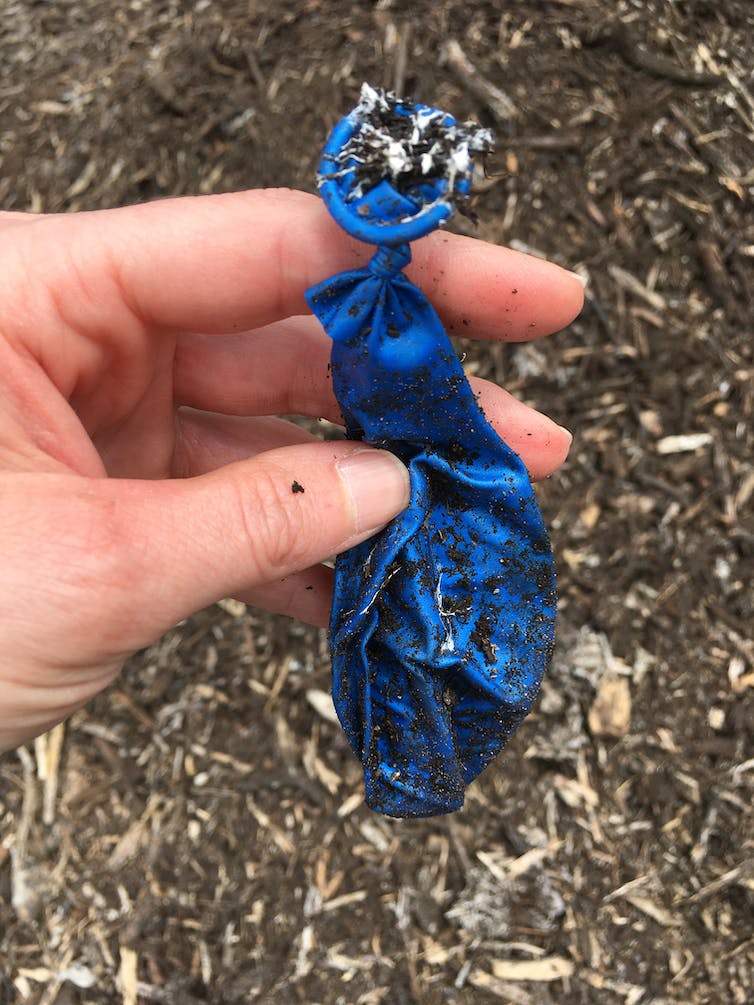 Not much changed after 14 weeks. Morgan Gilmour, Author provided

When they pop, they float back to the earth’s surface and land in, for example, the ocean or the desert, and wash up on beaches where animals can eat them, from sea turtles and seabirds to desert tortoises.

The stretchiness of balloons means they can get stuck in animals’ digestive tracts, which will cause choking, blockage, decreased nutrient absorption and effectively starve the animal.

Read more: How to get abandoned, lost and discarded ‘ghost’ fishing gear out of the ocean

Second, what most consumers don’t realise, is that to shape milky natural rubber latex sap into the product we know as a balloon, many additional chemicals need to be added to the latex.

These chemicals include antioxidants and anti-fogging (to counteract that cloudy look balloons can get), plasticisers (to make it more flexible), preservatives (to enable the balloon to sit in warehouses and store shelves for months), flame retardants, fragrance and, of course, dyes and pigments.

Even more chemicals have to be used to make the additives “stick” to the latex and to stick to each other, enabling them to work in tandem to create a product we expect to use for about 24 hours. So, the balloons can’t be “100% natural rubber latex”. 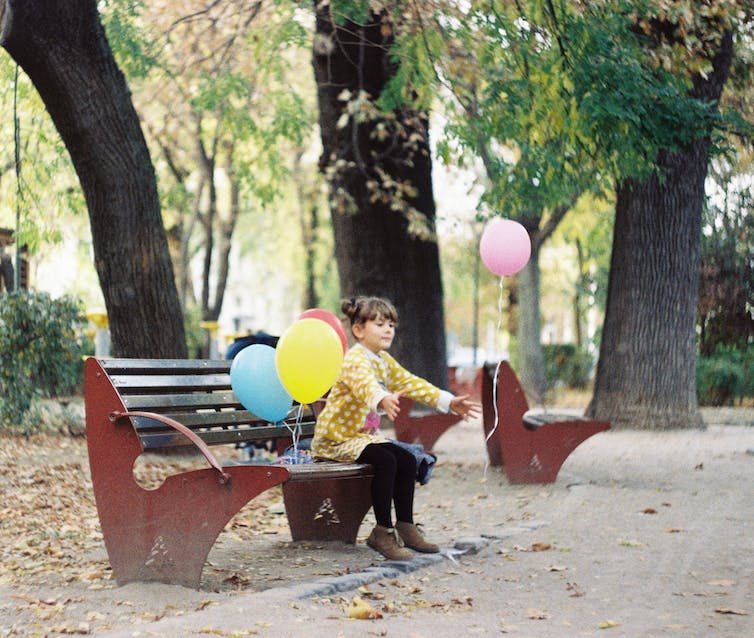 Balloons can travel vast distances in the sky before they pop and are eaten by animals. Unsplash, CC BY

And yet, despite substantial evidence of harm and the presence of these chemicals, balloon littering persists. Balloon releases are common, with only some regional regulations in place, such as in New South Wales and the Sunshine Coast.

While some factions of the balloon industry denounce balloon releases, these claims are only recent.

For decades, the industry relied on one industry-funded study from 1989 which claimed that after six short weeks, balloons degraded “at about the same rate as oak tree leaves” and there was no way balloons were a threat to wildlife.

That study was not peer-reviewed, its methods are unclear and not repeatable, and the results are based on only six balloons.

Read more: Avoiding single-use plastic was becoming normal, until coronavirus. Here’s how we can return to good habits

Because balloons are frequently reported to be at sea, ingested by wild animals and washed up on beaches, it’s clear they’re not breaking down in only six weeks. Anecdotal studies have tested this to varying degrees, confirming balloons don’t break down.

Only one peer-reviewed scientific study has quantified balloon degradation, and that also occurred in 1989 — the same year as the industry study. They tested elasticity for up to one year, which means the balloons were intact for that whole time. 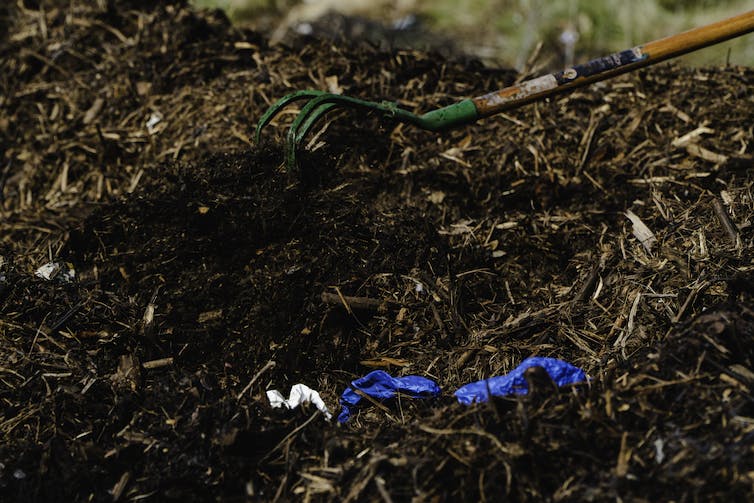 We tested the claims of the balloon industry. Dahlia Foo, Author provided

We wanted to know: has anything changed since 1989? And why aren’t there more studies testing balloon degradation, given the passion behind the balloon issue?

So, we set out to quantify exactly how long latex balloons would take to break down. And we asked if balloons degraded differently in different parts of the environment.

Our experiment tested their claims

Industrial composting standards require that the material completely disintegrates after 12 weeks and that the product is not distinguishable from the surrounding soil.

We designed an experiment: after exposing balloons to six hours of sunlight (to simulate typical use, for example, at an outdoor party), we put blue and white balloons in industrial compost, and in saltwater and freshwater tanks.

We allowed for aeration to simulate natural conditions, but otherwise, we left the balloons alone. Every two weeks, we randomly removed 40 balloons from each treatment. We photographed them to document degradation. Then we tested them. 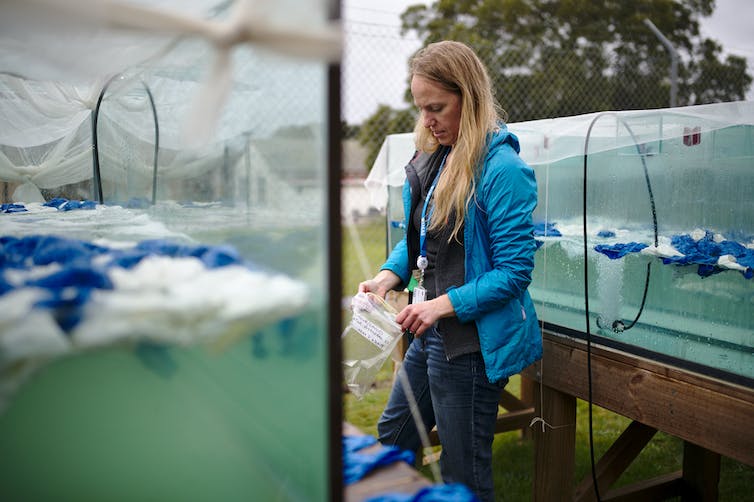 Were the balloons still stretchy? We tested this in the University of Tasmania engineering lab to determine tensile (resistence) strength. We found that in water tanks, the balloons became less stretchy, losing around 75% of their tensile strength. But if they had been composted, balloons retained their stretchiness.

Were the balloons still composed of the same things they started with? We tested this by taking spectral measurements of the balloons’ surface. The balloons showed signs they were exposed to ultra violet light in the water tanks, but not in the compost. This means their chemical composition changed in water, but only slightly.

Finally, and most importantly, did the balloons lose mass?

After 16 weeks, the balloons were still recognisably balloons, though they behaved a little differently in compost, water and saltwater. Some balloons lost 1–2% mass, and some balloons in freshwater gained mass, likely due to osmotic absorption of water. 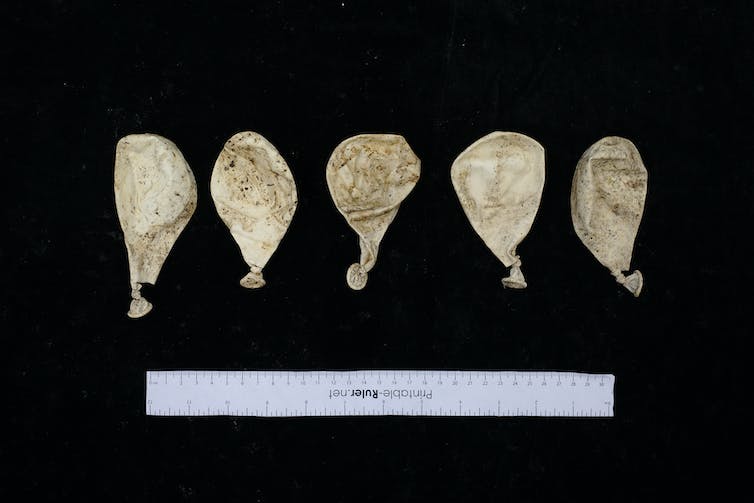 These are white latex balloons 16 weeks after we composted them. Jesse Benjamin, Author provided

What can we do?

It’s clear latex balloons don’t meaningfully degrade in 16 weeks and will continue to pose a threat to wildlife. So what can we do as consumers? We offer these tips:

Read more: There are some single-use plastics we truly need. The rest we can live without