Love, sex and mate choice are topics that never go out of fashion among humans or, surprisingly, among some Australian birds. For these species, choosing the right partner is a driver of evolution and affects the survival and success of a bird and its offspring.

There is no better place than Australia to observe and study strategies for bird mate choice. Modern parrots and songbirds are Gondwanan creations – they first evolved in Australia and only much later populated the rest of the world. 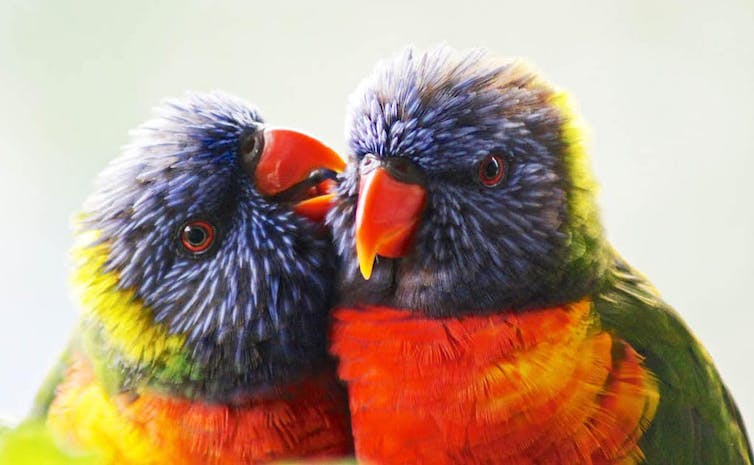 For years, research has concentrated on studying birds in which sexual selection may be as simple as males courting females. Males might display extra bright feathers or patterns, perform a special song or dance or, like the bowerbird, build a sophisticated display mound.

In these species, females choose the best mate on the market. But the males do not stick around after mating to raise their brood.

Read more: How the Australian galah got its name in a muddle

These reproductive strategies apply only to about tiny proportion of birds worldwide.

Then there are “lovers for a season”, which account for another small percentage of songbirds. Males and females may raise a brood together for one season, then go their separate ways.

These are not real partnerships at all – they’re simply markets for reproduction.

Birds that stick together

But what about the other birds – those that raise offspring in pairs, just as humans often do? Those that form partnerships for more than a season, and in some cases, a lifetime?

More than 90% of birds worldwide fall into this “joint parenting” category – and in Australia, many of them stay together for a long time. Indeed, Australia is a hotspot for these cooperative and long-term affairs.

This staggering figure has no equal in the animal kingdom. Even among mammals, couples are rare; only 5% of all mammals, including humans, pair up and raise kids together.

So how do long-bonding Australian birds choose partners, and what’s their secret to relationship success? 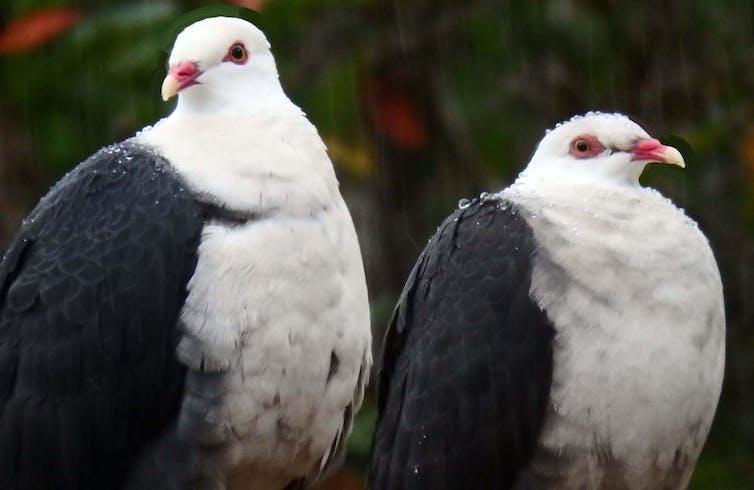 The concept of assortative mating is often used to explain how humans form lasting relationships. As the theory goes, we choose mates with similar traits, lifestyle and background to our own.

In native birds that form long-lasting bonds, including butcherbirds, drongos and cockatoos, differences between the sexes are small or non-existent – that is, they are “monomorphic”. Males and females may look alike in size and plumage, or may both sing, build nests and provide equally for offspring.

So, how do they choose each other, if not by colour, song, dance or plumage difference? There’s some research to suggest their choices are based on personality.

Many bird owners and aviculturists would attest that birds have individual personalities. They may, for example, be gentle, tolerant, submissive, aggressive, confident, curious, fearful or sociable.

Read more: Magpies can form friendships with people – here’s how

Research has not conclusively established which bird personalities are mutually attractive. But so far it seems similarities or familiarity, rather than opposites, attract.

Cockatiel breeders now even use personality assessments similar to those used for show dogs.

There is practical and scientific proof to support this approach. In breeding contexts, seemingly incompatible birds may be forced together. In such cases, they are unlikely to reproduce and may not even interact with each other. For example, research on Gouldian finches has shown that in mismatched pairs, stress hormone levels were elevated over several weeks, which delayed egg laying.

Conversely, well-matched zebra finch pairs have been shown to have greater reproductive success. Well designed experiments have also shown these birds to change human-assigned partners once free to do so, suggesting firm partner preferences. 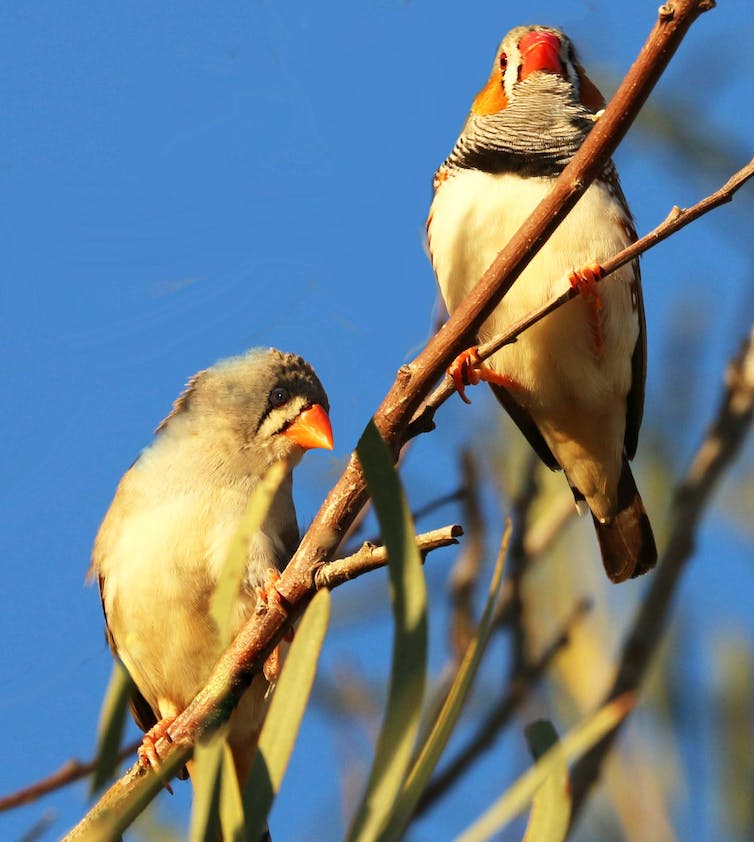 Now to some extraordinary, little-known facets of behaviour in some native birds.

Bird bonds are not always or initially about reproduction. Most cockatoos take five to seven years to mature sexually. Magpies, apostlebirds and white winged choughs can’t seriously think about reproducing until they are five or six years old.

In the interim, they form friendships. Some become childhood sweethearts long before they get “married” and reproduce.

Socially monogamous birds, such as most Australian cockatoos and parrots, pay meticulous attention to each other. They reaffirm bonds by preening, roosting and flying together in search of food and water.

Even not-so-cuddly native songbirds such as magpies or corvids have long term partnerships and fly, feed and roost closely together. 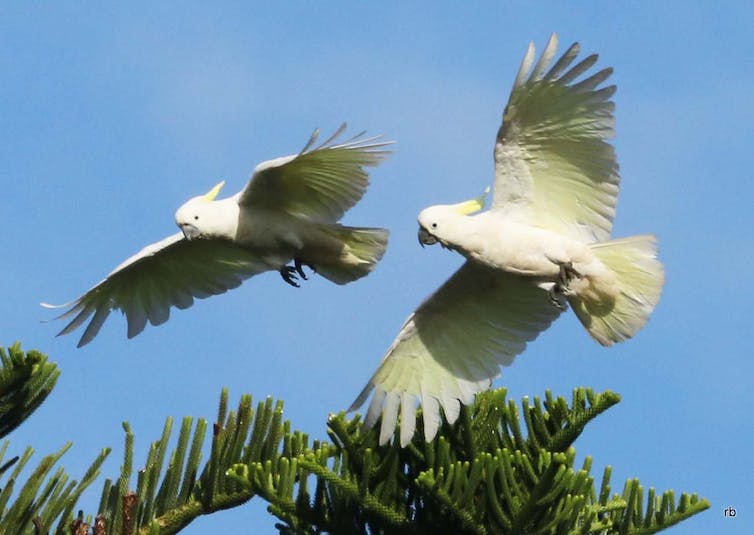 All in the mind

Bird species that pair up for life, and devote the most time to raising offspring, are generally also the most intelligent (when measured by brain mass relative to body weight).

Such species tend to live for a long time as well – sometimes four times longer than birds of similar weight range in the northern hemisphere.

So why is this? The brain chews up lots of energy and needs the best nutrients. It also needs time to reach full growth. Parental care for a long period, as many Australian birds provide, is the best way to maximise brain development. It requires a strong bond between the parents, and a commitment to raising offspring over the long haul.

Read more: Bird-brained and brilliant: Australia’s avians are smarter than you think

Interestingly, bird and human brains have some similar architecture, and the same range of important neurotransmitters and hormones. Some of these may allow long-term attachments.

Powerful hormones that regulate stress and induce positive emotions are well developed in both humans and birds. These include oxytocin (which plays a part in social recognition and sexual behaviour) and serotonin (which helps regulate and modulate mood, sleep, anxiety, sexuality, and appetite).

The dopamine system also strongly influences the way pair bonds are formed and maintained in primates – including humans – and in birds.

Birds even produce the hormone prolactin, once associated only with mammals. This plays a role in keeping parents sitting on their clutch of eggs, including male birds that share in the brooding.

The power of love

Given the above, one is led to the surprising conclusion that cooperation, and long-term bonds in couples, is as good for birds as it is for humans. The strategy has arguably led both species to becoming the most successful and widely distributed on Earth.

With so many of Australia’s native birds declining in numbers, learning as much as possible about their behaviour, including how they form lasting relationships, is an urgent task.

Much of the information referred to in this article is drawn from Gisela Kaplan’s books Bird Bonds, Bird Minds and Tawny Frogmouth